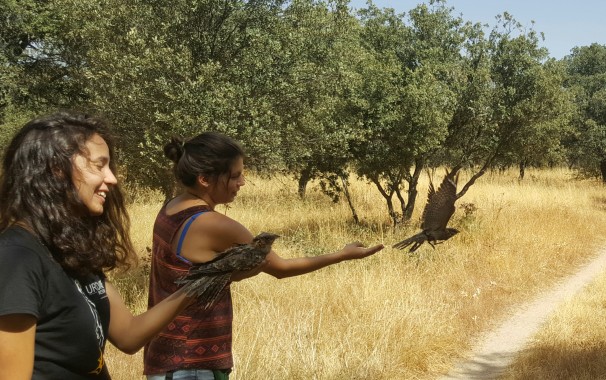 Despite the difficult economic situation in which we find ourselves, we can still enjoy some moments of joy in Brinzal. We continue releasing individuals recovered, this time it was the turn of the curious nightjars.

Each year they enter our center several of these birds so special that hunt insects on the wing by opening their huge mouths in parks, gardens, forests and mountains of Europe. They come every year from central and southern Africa looking for good weather and increased availability of food, for nesting.

In Spain arrive two species, the brown nightjar (Caprimulgus ruficollis) and Nightjar (Caprimulgus europaeus). The first one, something bigger and with brown tones, the second as its common name suggests, of gray tones. Both have a cryptic coloration which allows them to go unnoticed during the day as they are crepuscular species that take advantage of the darkness to hunt.

In our center they come every years several of both species. They are very delicate animals that require special care, they must be manually fed twice a day and handled with care since they lose feathers with ease.

Lay two eggs, is a nidifugous species, is commonly seen on the roads, and even if they seem abandoned, do not need our help. Sometimes they appear stuck in warehouses and basements where they can not get out and they hit themselves trying to find the exit.

This year we are getting very good results with them and so far every single nightjar has been recovered. This week we released four brown nightjar and already freed several gray in previous months. There are still some more that are on track to be released without problems, which fills us with joy.