Everything is Ok in the Hacking Cerceda 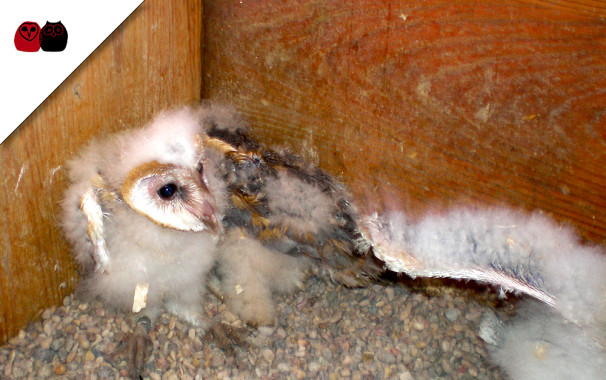 Good news from Cerceda, local group SEO-Sierra de Guadarrama, with whom we collaborate on a barn owl (Tyto alba) Hacking , informs us that everything is going as planned.

Since the small barn owls, born in our facilities, were installed last 8th of May in their new home they have continued their development in an optimal progression, they eat regularly, and learn to recognize their environment.

The four barn owls have developed definitive plumage, and although the age difference between them is noticeable all of them have an adult look.

On 22nd of May was the first time we record that they began to take peeks outside, and on 27th of May they came out of the box for the first time. The night between 28th to 29th of May two of them went outside. One of them is much more active and dares to make longer jumps between perches, and on the roof of the box.

The first flight took place on May 30 at 22:46 leaps from one perch to another, it seems that is not able to get it and goes flying into a nearby roof. It came back after a while, and this gave it confidence, because that same night made at least two other flights, apparently voluntarily.

On the night of 31st of May to 1st of June, the largest barn owl spent most of the time away from the box; also it seems that the second barn owl took its first flight, and the third one came out of the box to start exercising.

Everyday, when the food is delivered, it was found that the four barn owls stay in the box, so do not seem to have any problem to return once they have decided to fly, and it seems that they don’t have any rush for their independence.

You can see the videos on the Youtube channel of SEO-Sierra de Guadarrama group: https://www.youtube.com/channel/UC3i-wrcICNfdM4ywFsaV0xQ