A life dedicated to others 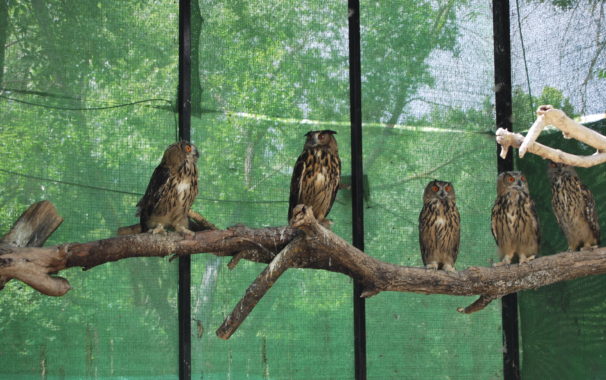 Yesterday we lost Volga, one of our adoptive moms of eagle owl (Bubo bubo).

Volga arrived in Brinzal in December 2000. He was electrocuted on an electric line, resulting in a very serious circulatory damage on his right wing. Even though she kept the wing, it never got full functionality. The eye was also affected by the electric current, producing a huge ulcer in the cornea.

During all these years, she have lived with Danubio – an institution when it comes to adoptive parents-. Both came even to be the main topic of an exhibition organized by La Caixa in which people could watch them taking care of the chicks and owlets of eagle owl to their care in real time.

In the almost 17 years she has lived in Brinzal she has been the mother of many dozens of chicks. Thanks to their presence, these have been correctly imprinted and have learned from a very young age to “be an owl.”

A hurray for Volga, and a huge thank you not only from our part. If they could speak, many of the eagle owls that we have released and that will be right now in the field, singing and preparing to reproduce, would also be grateful.

Volga, in the center of the picture, with Danubio on her right taking care of three big chicks